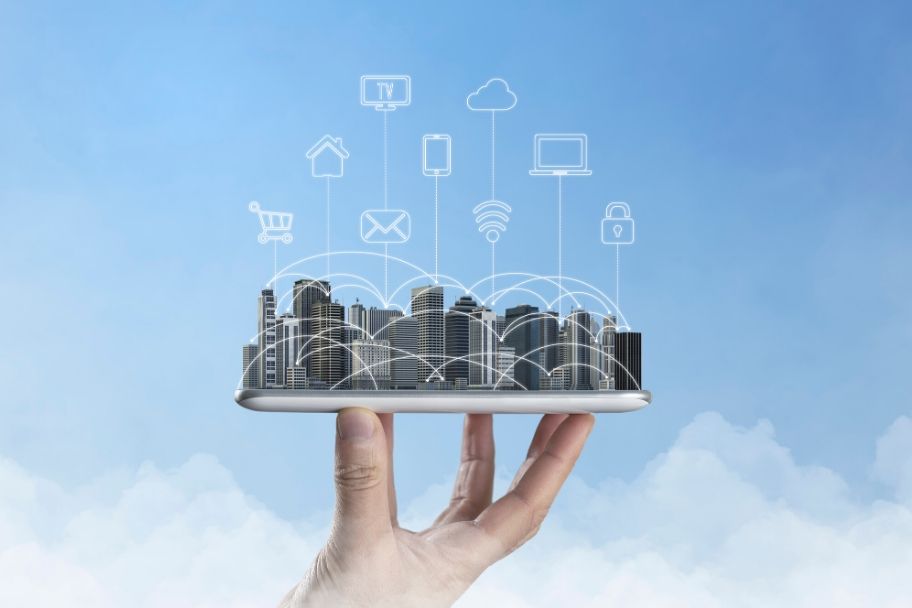 Why hybrid cloud solutions are the future

Today a large number of companies, but also increasingly self-employed and private households use cloud storage to store their data. The biggest advantages are obvious: The often large amounts of data no longer burden the local storage or the cloud represents a backup for those data that are nevertheless stored locally.

But a smart cloud storage can do much more today: Modern cloud systems offer users the possibility to share their data with others in a targeted manner or to work together online. Selective synchronization and sharing of folders also make work easier and give the owners of the data a maximum of control - at least if you choose the right cloud systems.

Nevertheless, there are companies that prefer a local system that is shielded on the company's own servers for fear of espionage and data theft. Basically, there is nothing wrong with playing it safe. But this article deals with the problems that can result from this isolation and what a hybrid cloud solution can do about it.

Private Cloud or Public Cloud? – Or both?

The advantages of internal company networks are manifold. To enumerate them would go beyond the scope of this article and would also mean bringing owls to Athens. The intranet, or private cloud, is basically used for communication and the exchange of data within the employees of a company. Through the theoretically possible reach of the intranet, employees should be able to access information and files both in the office and at home.

However, this range is often opposed by actual use. As soon as confidential contents and sensitive data land on the private devices of employees, even the best VPN network can no longer protect these data optimally. Not to mention the fact, that VPN access depends on a very stable and high-performance internet connection on the companys server. If something doesn't work, nobody can work anymore. This is not only annoying, but can also cause real problems, depending on the company. In the case of cloud systems, on the other hand, each employee is connected to the cloud storage via his or her own internet connection. If a system fails, even if it is the company's system, most employees don't even notice it.

With increasing company size (when the establishment of a private cloud first becomes worthwhile), however, the demands on the infrastructure of the internal IT systems also grow. More users, more storage, more areas that have to be shielded and accesses that have to be managed. A demand-oriented structure must also be scalable; after all, a company must be able to grow. Such structures are associated with high costs and require constant adaptation. At this point it is worthwhile to think about an external Cloud Hosting.

But when it comes to data backup, there is almost no way around a cloud solution. If all data is stored on the company's servers, it can all be destroyed at once, for example in case of fire or as a result of criminal activities. A cloud backup provides security - at least under the right conditions! 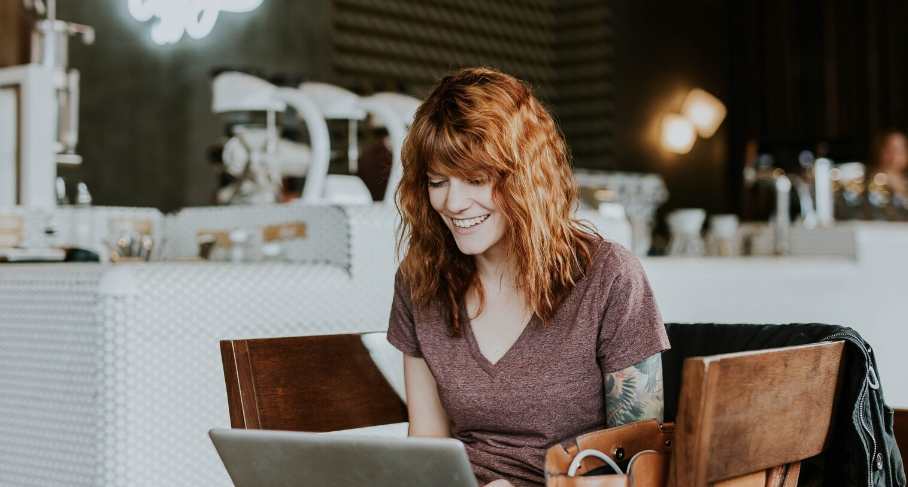 The Hybrid Cloud - more than "just" a cloud storage

Let's start with the basics. A classic cloud storage is like an external warehouse where you have rented a certain amount of space. You "carry" your data there, leave it there and retrieve it when needed. To edit the data you usually have to "drag" it out of the cloud and then upload it again. This is usually done automatically thanks to synchronization.

The problem here: any technical system can be affected by failures or maintenance. During this time the data in the cloud is not accessible. If you use the cloud storage as a pure backup, a failure only affects current changes. However, if you outsource your data completely, e.g. to save internal capacities, you have no chance to access your data in this case. The "data sovereignty" no longer lies with you, as you are not fully in control of your data.

The Hybrid Cloud avoids this shortcoming by linking two different cloud systems. This is usually a combination of private cloud and public cloud: In the company, an internal server - e.g. a NAS server - provides the second system. Or rather the first, because the NAS server is where the company's internal data management is located, i.e. the private cloud. The company's employees in the office are all connected to the NAS server, not to the public cloud. This means that all files are always available in the company and can be accessed by the users even if, for example, the internet connection is lost. The data sovereignty remains in any case with the owner of the data, i.e. the company. 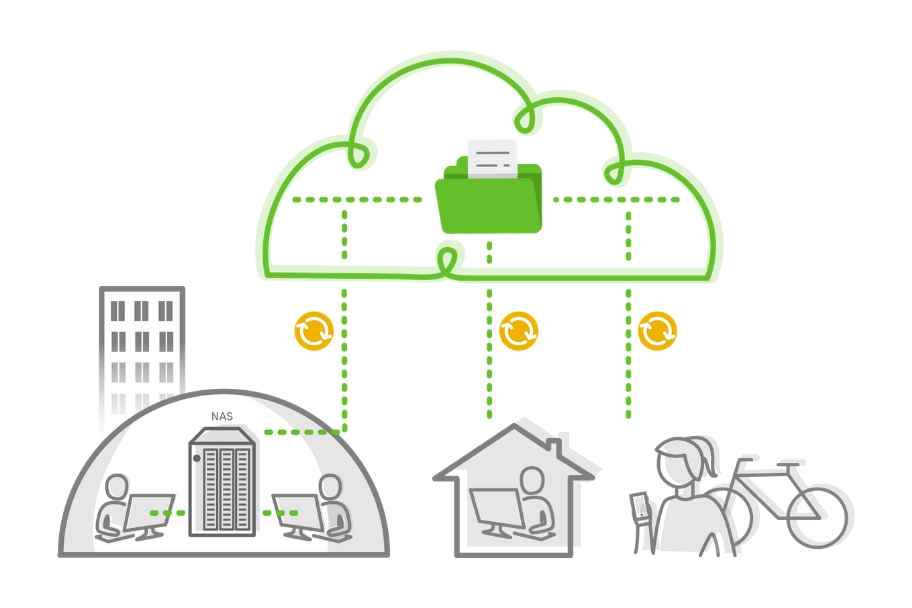 In order to secure all data in the long term and to make it available to employees in the home office or field service, the private cloud or the NAS server permanently synchronizes with the public cloud. So if you want to access internal data from home, you don't have to use a VPN access to connect directly to the private cloud or the NAS server (which can quickly lead to a VPN connection being overloaded when there is a high user frequency and corresponding data volumes), but instead access the data in the public cloud directly.

The question is legitimate: What makes a NAS server special as a private cloud?
Granted, coupling a local server with a cloud is not a fundamentally new idea. However, it has rarely been implemented because most servers are not designed to permanently transfer data to and from a cloud. For example, standard servers use so-called WebDAV protocols, which laboriously upload complete documents and data records to the Internet. This is neither fast nor efficient and therefore hardly suitable for use in companies.

A NAS server, on the other hand, is smaller and significantly more powerful than old-fashioned servers, which is particularly important when companies operate their own data center. In addition, they are simply and easily integrated as a network drive and can be managed via the browser of a PC, independent of the operating systems used. 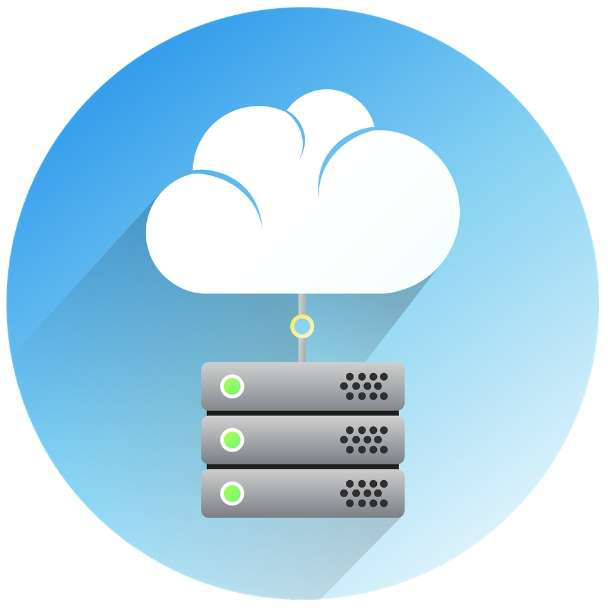 But much more interesting is the design of the NAS devices: Thanks to the modern HybridMount caching solution in combination with the intelligent synchronization of the luckycloud software, the connection between NAS and cloud is more efficient than ever. Sounds complicated? It‘s not at all.

How exactly this works and which combination of cloud solution and NAS are the best, you will learn in the continuation: